I don't know if it's just me, but dogs seem to be taking over the world - not just in the puppy boom of the pandemic but also in signs of an even more canine future.

Hounds are now turning up in places they've never been allowed before, such as plane seats, courts, strata blocks and even beaches.

As a dog owner and lover of most breeds, I wonder about those who don't share these feelings, especially those with cynophobia — a fear of dogs.

In case you missed it, Monday was World Animal Day, and hundreds of pets were blessed by a priest in a drive-through event in Manila. 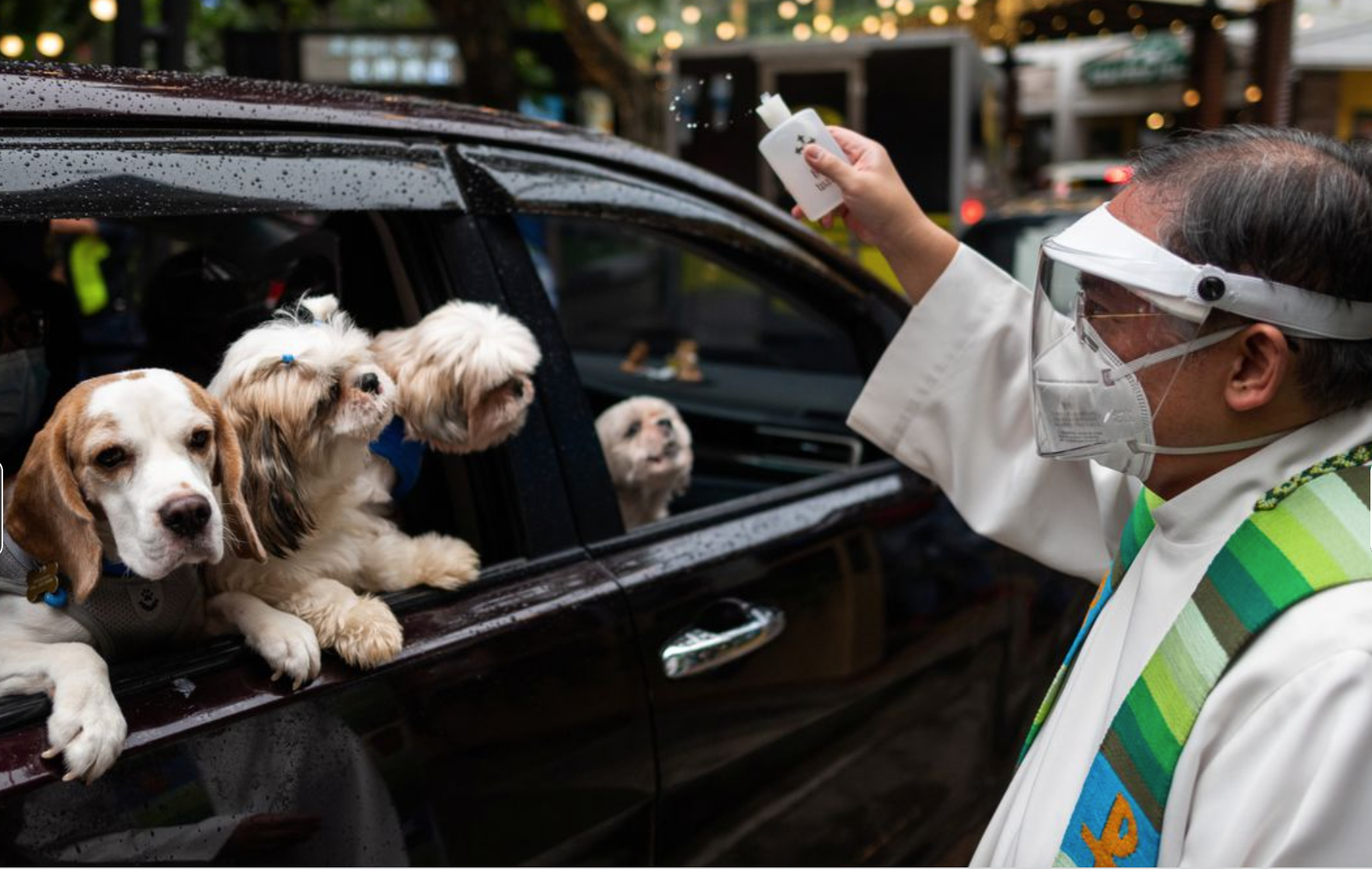 It might look a little crazy, but it is nothing compared to the invasion of parks and open spaces by proud owners and pets strutting their stuff.

As with so much else these days it's blamed on the lockdowns and dogs are proven to be a plus for our mental health. But as the restrictions ease, the four-legged friends show no sign of retreating.

Compared to say Europe, Australia has tended to keep dogs in their place - often outside. But just as dogs have inveigled their way into some people's beds, they are also barking at previously closed doors.

It was reported in June a strict ban on animals in plane cabins could be relaxed. "It's not 100 per cent simple but what we're saying from a rules point of view is as long as the safety rules are ticked off, we're not going to get in the way of it," said a spokesman for the Civil Aviation Safety Authority (CASA).

In many US states and also in Australia, 'support' dogs, also called canine court companions, often Labradors, are allowed in courts to help relieve stress.

In August, new laws in NSW put an end to blanket bans on animals in strata units even if the residents had voted against them. Pets can be excluded but only due to limited grounds such as damage, noise or smell.

Dogs' access to beaches has always been a vexed issue. Yet of late, I have seen more of them being walked along the shore in early mornings regardless of lifeguards putting up flags. Have you seen the same?

In time we may see dogs in cafes and restaurants and even (as is unremarkable in other countries) on buses and trains. There are even dog-friendly open-air cinemas.

I repeat, I'm a dog lover but appreciate not everyone shares our views.

What do you think? Is it a long-overdue change improving dogs' access to more of the human world, or will it be fraught with problems?

PS: You might have missed it as I did, but last Friday, Oct 1, was the United Nation's mandated International Day of Older Persons.

It's been on the global calendar since 1991, but there are so many days of this and that - it's easy to miss. The topic is right on the money Digital Equity for all ages.

I like the idea of having well behaved dogs in open areas. I personally am not ready to take my crazy canine to a cafe or open cinema, she is too social and thinks everyone loves her and wants to be her friend. I was brought up with the belief that 'Your pet is someone elses pest'. There are people who are scared or are allergic to dogs and cats so we must be mindful of this. I loved it in Europe and Britain where you go in and there are dog areas in the pubs or restaurant/cafe's. these dogs are under the table or chair of their owners, not on the chair and not scabbing from my plate, You wouldn't even know that they were there.

I think it is great that we are now able to take our fur babies to various places that before were taboo. We like to take ours on holidays in our caravan and are please to see a lot more caravan parks allowing pets. I feel the ones that don't allow them will soon find out they are missing out on loyal travellers bi-passing them. This is of course the responsibility of the pet owners to make sure their pets behave themselves.

I think it’s great that responsible owners should be able to take their (well behaved pets with them within reason.Heavy fines for not picking up poop. Not allowed between flags on beaches( best to have dog areas on beaches. Outdoor restaurant areas would be best suited. Maybe introduce ‘well behaved certificates’ for pets!

🐘🦧🦭🐸🐞🐈🕊🦔🐳🐖🐑🦮🐄🐅🐎🦥🐓🐝🦋 Yes yes yes,animals in general need to be given more respect! There is SO much cruelty & suffering to our amazing Animals, both on land & in our seas & waterways - shame on we humans‼️ How much more proof does “our” species need,to see the value,comfort,companionship,loyalty,love etc of a Dog especially & many other Animals.. How can ANYONE say a human ls less noisy,destructive or smelly,than a dog⁉️ Unless your dog,cat,etc is cared for like part of your family, DONT get an Animal! PJ Victoria

Long overdue. In European countries that we've been to, the strays are very social & so well behaved that I felt like bringing a couple of them home to Australia. 💓

Well behaved is the operative word here. Most of the owners near me wouldn't know the meaning of those words. If you think that an owner allowing their dog to sit on a chair and eat from a cafe table then I feel very sorry for you. Dogs belong on the floor. The owner should be the leader of the pack not the mutt!

It's about time our canine companions were accepted in more places. They don't have a problem in the U.K, where dogs can be seen in pubs and on transport. Unfortunately it's just the few who spoil it for the rest of us. Most genuine dog lovers do the right thing.

Don't get me wrong, I like them, they are beautiful animals, that's just what they are, feed them, care for them, give them pats every so often, keep them in a warm kennel with blankets but not between the two of you. They can't use toilet paper and you let them sleep in your bed and sit on your couch? Some of them carry disease, they lick their genitals then you kiss them? Ple.......ase keep them out of my rental property as they wreck them, believe me I have been a victim of this.

I'm 100% on your side. A dog lover all my life, I find the inane regulations that governments such as local councils impose on our canine citizens most distressing. As for dogs on beaches, it is illegal to walk a dog on a beach, even on a leash, practically everywhere in Sydney. I see that most of the comments below are negative. Dogs have been companions of man for 10's of 1000's of years and the first domesticated animals on the planet. I agree that they should be properly trained and socialized but anyone who objects to dogs sharing our world needs to take a pill and relax.

At least I am getting a lot of exercise in in shoveling the deposits on my lawn back to the owner's driveway. Shame that a window was left open (conveniently) on their car one day! There is a significance preponderance of yapping toilet brushes/pipe cleaners that seem to pervade coffee shops and units with their incessant yapping and constant clamouring to be heard as "top dog" in the neighborhood.

I like animals,but not in my company while travelling. We will require separate planes,trains etc. for dog lovers.Woof! Woof!