NewsThe big questions we need to ask about loneliness in society - and how I blew it on the ABC!

The big questions we need to ask about loneliness in society - and how I blew it on the ABC!

Along with the pandemic we are said to be facing an epidemic of loneliness, in part caused by the ‘connectedness’ of digital communications which still manages to divide us and can be a poor substitute for the real thing.

Alongside the all-consuming buzz around everything COVID, a greater concern is emerging about this condition of loneliness, its prevalence and the questions of what we can do about it as individuals and a society.

Not that there’s anything new about loneliness...  It’s been part of the human condition for millennia if you believe the poets and philosophers. More than 300 years before Christ, Aristotle nailed it claiming: “He who lives alone is either a beast or a God.”

He knew that, as social animals, us humans really do need each other.

A perceptive piece in The New Yorker magazine this year on the history of the condition points out it’s only in the past 100 years or so people have lived alone - let alone endured lockdowns and quarantine.

It may be a ‘vogue term’ but loneliness is demonstrably bad for your physical and mental health and the UK has even appointed a minister for it, or rather against it, along with a policy platform.

Research quoted by The Conversation shows loneliness and social isolation can result in a 50% increase in premature death and is linked with higher blood pressure, risky cholesterol and needless to say depression.

Given the authorities are always trying to stress physical as opposed to social isolation as the best way to fight COVID-19 we might be more conscious of the risk of being alone. Unlike the stereotype of the Beatles’ Eleanor Rigby, it’s not restricted to the old. One in three young adults said they suffered from problematic levels of loneliness according to a recent survey in Victoria.

So a few weeks ago when a group email invitation from the ABC’s Q&A program asked for questions on this very topic I couldn’t resist.

I dashed off the kind of showy statement with a query that the panellists seem to relish. (“Good question,” they gush, then proceed not answer it.)

My question referenced actress Greta Garbo’s famous “I want to be alone” line and asked if that’s always such a good idea given the negative side of prolonged solitude.

I didn’t have the nerve nor time to include French existentialist philosopher Jean-Paul Sartre’s sentiment: “If you're lonely when you're alone, you're in bad company.” 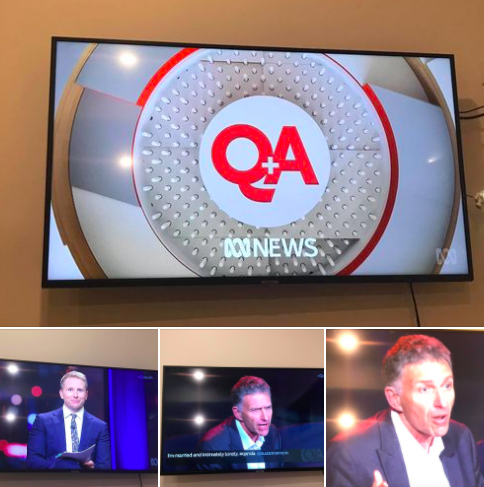 Nevertheless, my question was chosen and I was asked to be at the ABC Sydney studios at 9pm on a recent Monday night for the live show.  I was all alone with only 18 guests suitably spaced around the sizeable studio. That's me in the pic.

The questions and discussion were personal, heartfelt though somewhat predictable. There were some moving reflections on when loneliness can lead to suicidal thoughts or the actual act. Many reported afterwards it was the best Q&A in ages as there were no politicians.

But as the time came closer for my question it seemed limp, self-indulgent and largely irrelevant. Who cared about Greta Garbo having heard all this? Surely we needed to talk about if there was any serious role for government policy, local state or federal in defying this demon?

I thought I had five minutes to go before I was on so I started reframing the question (a real no-no on Q&A as all the panellists have prior knowledge to what they are being asked), when host Hamish MacDonald called out my name.

Check out the Q&A episode here where you can find the precise moment (33m 39 secs of you’re interested), and read my own longwinded question. Suffice to say the panellist’s first response was “Good question”!

Had I the time again, I would have asked about the UK’s experiment with a minister for loneliness and what sort of policies in terms of housing, education or whatever all governments might make to counter the growth of loneliness.

There is some work going on in Australia to address the problem. Volunteering, online groups ironically, pet animals, exercise and other activities are all suggested as ways to keep it at bay.

It’s a health as well as social problem which does not seem to be getting any better. In another blog I’ll look more specifically at what we can do to counter loneliness and what’s working.

There are many questions about this sorry subject and it would be nice to think someone has the answers.

The big questions we need to ask about loneliness in society - and how I blew it on the ABC!

Yes it’s a changing world gone are the days of large attendance at churches and local pubs to meet up with the local community. The traditional RSL Clubs have gone commercial with many taken over by developers. Membership of Rotary and Lion Clubs are down. Community groups no longer get together to build a children’s playground leaving it up to Council. Street parties at Christmas , Royal occasions and neighbourly events are a ‘no no ‘ requiring a council permit. I recall organising “bush walks” one attended by 200 locals but this can’t happen today because of insurance issues. Gardens are so small one can’t hold a backyard cricket game. Playing marbles and rounders and other games in the street is not possible because of traffic. Thank god for the iPhone and iPads and TVs when we can sit all alone and reminisce. Cheers Jim