NewsHow can we make Aged Care live up to its name?

How can we make Aged Care live up to its name? 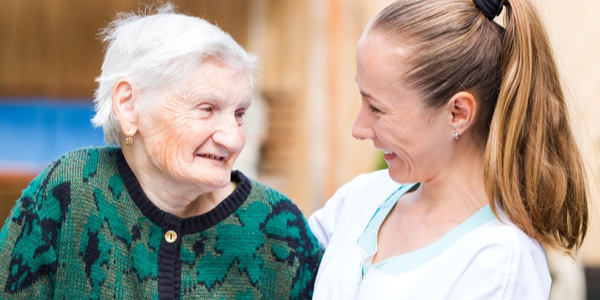 It's hard enough admitting our own mortality. So it's perhaps no surprise that another inevitability of getting on, namely aged care, is often pushed into our 'too hard' basket.

Anyone who has navigated the existing system, either for themselves or a family member, will attest to its many difficulties, as highlighted by the damning findings of the Royal Commission.

So what as a nation, as well as individuals, are we to do?

Last week's release of the Royal Commission report into Aged Care Quality and Safety exposed the underbelly of substandard care - and an appalling lack of care.

As well as the horror stories, the commission found almost one-third or 30% of residents have been subjected to what it defined as sub-optimal care.

It's hard to relate to how life must be in such institutions where many suffer from dementia, are too readily restrained by chemical and physical means, and left to sit or lie in their own waste.

It's little better to reflect on the undue and unnecessary misery caused by an inadequate and often frankly lousy diet.

On average, it was found that a paltry $6 per day was budgeted on food for each care resident. For three meals a day, that's just two bucks. Try eating on that princely sum for long.

The commission unearthed what it called 'staggering rates' of malnutrition and the wasting away of weight loss. And yes, this is in Australia. It recommended an immediate extra $10 a day be spent on food.

Given the many pressing problems about staff training, their low numbers and their poor pay rates, the $1 billion cost of this - just one of 148 recommendations -  should make for a good start.

With 1.3 million older Australians in care the costs are considerable. We spend $26 billion on aged care annually with all but $5 billion of it subsidised by the government.

Yet even that is less than half of the amount budgeted by comparable OECD countries. On average, they spend 2.5 per cent of their GDP on the sector.

While we await the federal government's response to the commission, notably what they intend to do and how to pay for it, there are two main funding ideas on the table - none of them cheap.

In a split between the commissioners, one has proposed a one per cent levy on all workers to kick in within 18 months. Another Commissioner, Tony Pagone QC, suggests a levy that rises according to how old you are and how much you earn.

In the ultimate expression of user pays, he says in the report: "People should contribute to financing the aged-care system in accordance with their income over their entire lives."

All the time, demand is rising as Australians are ageing. Tens of thousands of new places will be needed in communal residential age care within a decade at the cost of $50 billion-plus.

Most older Australians prefer to remain in their own homes for as long as possible, but there's 100,000 on the waiting list to access home care packages.

Any waiting list can be a torment, but at these peoples' ages, 12 months long can mean it's too late to exercise any choice.

Improving food is, by comparison, an easy start. How we share the payments for the other much-needed reforms will kickstart what's daintily called a 'national conversation.'

It's likely to involve claims on assets such as the until-now exempt and sacrosanct family home. It's way past time we stopped avoiding aged care and started making it both better and fairer. Sooner or later, we'll probably need it.

How can we make Aged Care live up to its name?

Thank you to the correspondents who share my views on the regrettable quality of Aged Care facing us should we need it. I have no family to cushion me so I began to do some home work and it has a very disturbing experience and rightly called a nightmare that comes at a time when older folk are not equipped to 'manage' the bureaucratic tangle. Our Government is planning to throw huge amounts of money at Aged Care but I do wonder just how much of that is going to reach the residents before it is creamed off by the Providers who are making a very comfortable living from the profits. I was horrified to learn that Carers are only earning slightly more than the minimum wage for a day's work which is physically exhausting and mentally draining depending on the level of care offered. Basic In-Home care is equally poorly paid and carers have only brief training before their assignments. Blame my cynicism on my age but I am wary of 'family owned' and 'not for profit' Providers which sounds awfully like marketing terminology and I have yet to hear good reviews of services. Massive profits and cost cutting has saved the Providers during the turbulent financial times through the GFC and now the Covid19 ... or have I missed something there?

It will be a terrible shame if aged care homes in small towns have to close if they can’t attract trained staff. My mum is in one and being looked after very well. When residents have family close they can monitor the treatment their loved one is getting. If she has to be transferred to a larger facility in a distant town where all are strangers it would be devastating for her. This is the other side .

What about the massive profits those residential care providers make! It isn't just that the Government needs to provide funding. They need to and are supposed to ensure that Quality Assurance Standards are maintained and adhered to, the cost cutting particularly with staffing and food is appalling. The doing away with Registered Nurses has got to stop. I mean so many supposed high quality 5 star residential care places that don't have enough food for all the patients is mind boggling. People are paying high amounts of money to enter and then depending on what dining room they are in there may not be enough food left from the caterers to feed everyone! Come on. PROFITS over CARE

Being sound of limb and very independent, it came as a shock when in 2020 at the age of 72 I became an invalid. My whole world collapsed as I knew it - no independence - no car. I was told I would be heading to a nursing home. I struggled physically, but never saw myself as surviving in an aged care facility. After 7 months of hospitals and rehab, I mastered the 4-wheel walker, and managed to come home alone. I have a permanent catheter that requires constant changing, eat only frozen meals delivered by Woollies, an absolutely brilliant Taxi driver who takes me to appointments and drops in unexpectedly with something delicious to eat along with a supportive neighbour who does the garbage bins and pops in to see I am OK if I have not put up the front blind. I have managed the assistance carers who attend 3 hours to showers me and do a minimum of housework. I am assessed for a Level 3 Package however am still 12 months or more away from it being offered, I am 3-4 months away from the lowest Level 1 package being offered. I don't like asking how long until I am offered the Level 3 package as I feel I am asking someone to predict how long before those in front of me will pass to free them up. I should not complain, I am in my own home. I wish I had know beforehand all the ins and outs of how Aged Care works. It is a minefield. Perhaps the Government could introduce a mandatory three day course for everyone turning 65 to equip us for what inevitable, if we are spared, lies ahead.

I have been connected with NursingHomes all my life untill the right old age of 80 years not only that was also connected with Community Care and Police ,There is so much that requires to be dealt with there is not enough space ,the main item is staffing and there Training .You do not allow untrained staff to be left to look after the residents there has To be at least one S.R.N TO 20 ,A PCA if she has taken her training

This is a subject that cannot be answered in just a few words ,for most of my long life I have been involved with Nursing Homes with Community Care and latterly with the Police,, For Nursing Homes to be run in the correct manner for there Residents ,they must have the correct Ratio IE one fully qualified staff member to every 20 residents ,PCA must have had there training in order to help with the running of the NH they do the basics ,unfortunately this has not been the case for many years ,As the residents grow in number the staff are not increased ,and the ratio is out of all proportion this has to cease, Residents need the very best of comfort and understanding ,This is there home for as many years as they have left.It is up to the goverment ,the Health Minister and others to make this the Law