NewsWhat if it's not just a well-subsidised parliament house where there's a problem?

What if it's not just a well-subsidised parliament house where there's a problem? 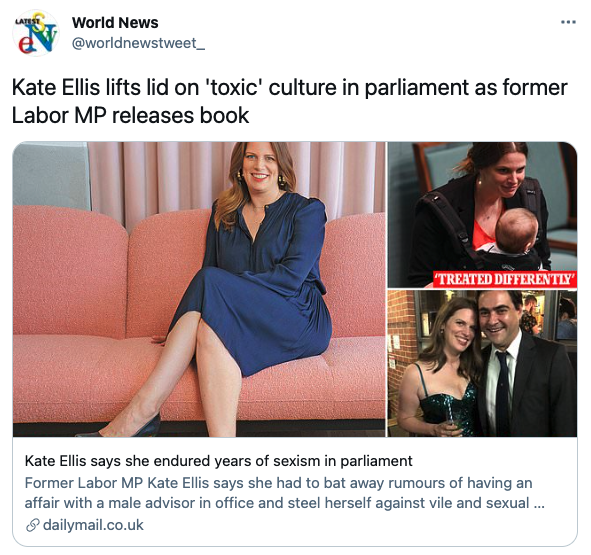 There's been understandable outrage at what's been going on at parliament house for far too long. Some of it behind closed doors and too much, according to a new book, unashamedly in plain sight.

Much of the excess is blamed on a toxic politicised culture that is bankrolled with generous pay and conditions by the public (that's us). So surely we're entitled to ask more than just questions.

Another week and yet more revelations of workplace abuse in Canberra, which you'd hope wouldn't be as widespread elsewhere around Australia.

Former pollie Kate Ellis's book Sex Lies and Question Time outlines the appalling sledging and innuendos used against female MPs not just in corridors but also in the chambers themselves.

Given the singular focus there's been on parliament house of late, which plays into the joint's self-centeredness, expect word of more toe-curling and possibly illegal activities to arise.

And we can expect that other workplaces, such as the armed forces, will discover more of their dirty laundry is aired in public.

The diminishing public trust in politics and the increasingly large subsidies paid by taxpayers for the institution of parliament house means what happens there remains important.

In a place where laws are made, it's fair enough that there are codes and standards of reasonable, understood, and enforced behaviour.

Anyone who has worked in the public service, or much of corporate Australia of late, will know the time and effort now devoted by HR departments into the compliance of such matters.

So what on earth has gone on in Canberra? Many experts of the armchair and other varieties will doubtless have their say, but I was interested over the weekend by a theory put by an outsider.

A senior foreign diplomat, who has long experience of the Westminster system in various nations, told my contact that politics here was simply tougher and dirtier than in other countries.

Blame poor recent leadership, the erosion of support for major parties and the growth of minor ones or even our colourful convict history, but whatever the cause, he says, we have a nasty political culture.

It's a challenging condition to measure or even compare, but whatever the cause, there seems something rotten we need to fix. In finding any remedies, we'll have to decide if this rot is unique to Canberra or further spread amidst our body politic and perhaps beyond?

What do you think? Is the current torrent of allegations and condemnation justifiably aimed at parliament house, or is this singular focus on Canberra distracting us from a more widely spread malaise?

What if it's not just a well-subsidised parliament house where there's a problem?

It doesn`t matter where we work, live or play we all need to show common courtesy and respect for one another. It works both ways but those in authority have a greater responsibility. So politicians, parents, directors and managers please treat others like you would like to be treated. God listed 10 “rules” for us to live by. Wouldn`t it be a far better world if we all lived by them? Paul NSW

Sack the lot of them and have an election Now

This is not a recent problem and from my experience not just in parliament. As a female I have experienced yelling by female colleagues and not in a govt department and recently. Some male friends have been accosted by women putting their hands on their groins despite knowing the males were married with kids. Don't blame the parliament- mind you I saw Penny Wong blowing up a couple of weeks ago and I was so embarrassed by her yelling and name calling as she went about humiliating the opposition I switched off the telly. I have friends who are teachers who are spoken to like they are garbage and despite all the best intentions of the system, the problems seem to perpetuate- the poor teachers, many who are so dedicated, are completely humiliated by poor behaviour- it is difficult to gain any traction as the kids and the parents often have little respect for their profession. I know of one organisation that now has a Nil Tolerance mantra and there are constant training sessions that must be completed in order to maintain employment. It seems to be working.

As someone who fronted Parliamentary committees occasionally and knew quite a few public servants that had to engage regularly with Ministers' offices, I can tell you that the cultural issues in Parliament House go WAY beyond treating women badly: the standards that apply in other workplaces just haven't applied to anything like the same standard in PH. For example, abuse and intimidation of public servants was quite common and hardly a surprise when you observe the often terrible exchanges in the chambers themselves. While other workplaces (including the whole Federal public service during Malcolm Turnball's time) are subject to what feels like constant review, virtually nothing in our political system adapts at anything like the same pace? It's a mystery to me what's stopping PH adopting many of the standards of the federal Public Service, although it would mean no free lunches and trips to the footy... Wait a minute...

The problem is not confined to federal parliament, and it is just as much a problem in private enterprises. I once worked in a department dominated by women managers in a Labor dominated state. The toxicity towards men was disgusting, it is not confined to one gender although generally women suffer the worst of it. A common belief is that we get the governments we deserve which seems to confirm what I have written. Society generally has dropped its standards of decency. It must be said that as the Christian principles on which our society was founded are discarded the problems increase significantly.

Has the mobile phone has exacerbated the break down of respect?

I don’t think it’s as widespread. I was with the public service for years and any real hint or abuse was knocked on the head very promptly. Although I must say it could be dependent on who the boss was . When I left the manager of my office was from a background of women being inferior and before he was promoted he was a bully. Once promoted he walked the walk but he was still quite biased. The Canberra political bubble is the problem it’s a cesspool.

The example set by politicians is part of the problem, the toxic culture of organisations like get up add to the problem. Civil debate has been replaced by vitriol and hate , no wonder there is a lack of respect in all workplaces by some not all .

I have been saying for years that Men will not respect women until they start respecting themselves. Just look at the photos of Bondi beach, the girls might just as well be wearing nothing, it is no wonder they are getting attacked. Then look at ninemsn news, ever second photo is of a girl with everything hanging out and their backsides covered by a string. I find it disgusting, I have a wife and two daughters, I hope I have instilled a better character in them.

Part of the problem is the decline in manners. Parliament has become a live version of Twitter, where anonymity breeds contempt for others. Maybe we could solve it by reverting Canberra to the sheep farm it once was and moving the capital to Parramatta (which once was the seat of government in the colony). Pollies and staffers (of whom there are too many) would then have to mix with ordinary people and might come down to earth.