NewsLosing a pet dog, I mean blog. A blog about a beloved late dog. 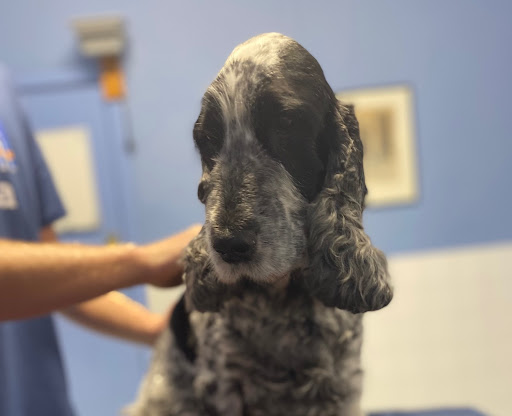 Losing a pet dog, I mean blog. A blog about a beloved late dog.

Even when you are allegedly a grown-up, losing our pet reduced me to an over-emotional jelly, and I cried ''like a child''.

It's not like we didn't know our dog was on his last legs.

Sprocket, the spaniel, was given three months to live more than 18 months ago after the vet found an aggressive tumour at his rear end.

But being the dog he was, Sprocket defied our orders, he defied larger, more aggressive hounds, and he certainly defied veterinary science. But only for so long.

One weekend he was swimming at Bondi off the rocks and chasing his ball, although true to character, never returning it, at his favourite park.

A few days later, he suddenly stopped eating, refused to walk and lay down to die without a whimper or any distress. He was aged nine human years. If only it could always be so easy.

The vet got a bit teary herself as she helped him on his way with us all present. The euphemism ''put to sleep'' seemed so apt.

Many of you will have stories about losing a pet and how it feels. My Facebook is awash with accounts of the depth and length of grief that can follow.

I also work in the human funeral sector, so I am aware of the role of ritual and memorialisation in coping with grief. It even works for animals.

So this is how we buried Sprocket, the English cocker spaniel, and I hope, without being too indulgent or dog-crazy, sent him off proud. 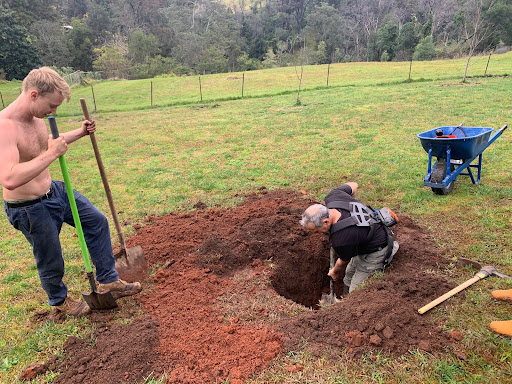 When Sprocket was first diagnosed with cancer, I asked my brother-in-law, who has some acreage in the Blue Mountains, if we might inter him there.

I wanted hands-on involvement in digging the grave and holding a small ceremony we could all share. The site was a field where he loved to chase balls.

I was encouraged by a great book called Lost Companions – reflections on the death of pets by Jeffrey Moussaieff Masson.

We put the dog on ice at home after the vet and drove to the mountains early the following day to dig the modest grave.

I was apprehensive about how he'd look after 24 hours in the esky, and we gently unwrapped him from the plastic ''doggy'', (not body) bag the vet gave us. It wasn't scary. He just looked at peace.

We put flowers on the body, wrapped him in muslin and placed him in a wheelbarrow. A short procession followed to the graveside where we all tearfully said our piece along the lines we may not see his like again.

He was committed to the earth with full canine honours accompanied by his favourite ball and a large bone. We filled in the grave, and above it planted a magnolia tree. 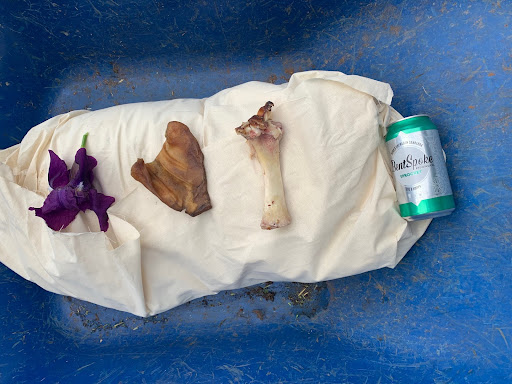 Before you think we are entirely batty, the ancient Romans, even the common folk, sometimes made graves to their Fidos with elaborate epitaphs.

"I am in tears, while carrying you to your last resting place as much as I rejoiced when bringing you home in my own hands fifteen years ago." (For more, see here)

Fido, the generic name for a dog, comes from the Latin to trust and confide in. I certainly did both with my Sprocket, and I am content we were all able to honour and memorialise his contribution to our family.

How about you? Were we mad, or does having a ceremony even for a pet make a difference? What have you done to say goodbye in the past?

Losing a pet dog, I mean blog. A blog about a beloved late dog.

I had two related Welsh Border Collies and they were happy,loved magnificent dogs. We had a wonderful time together. We would walk and play together .If I sat on the floor propped up against the settee,one would come and cuddle me on the left side and the other on the right side, We had 6-8 doggy songs that I would sing them. They knew the songs and the one they loved most of all was: 'Hello! Hello 'and this song could completely change their mood. We had lots of fun and no matter how comfy they were even in the evening when they were curled up in their beds,if I sat on the floor they would straightway get up and come and sit on either side of me- always the boy to the left and the girl to the right, always in the same places. They later also had a peaceful and loving passing. My vet helped me.I then took each one as their parting time came , to the tip in a sack and then came home and made a cup of tea.They kind of made it clear when they were ready to go to rest and I did everything I could to make it a peaceful and loving time after a loving life with lots of love and cuddles throughout their lives. They were great protectors and greeted everybody who visited and I still feel that their benign spirit is in my home with me and we are all at peace

Our 12 year old Silky Bichon Milly became I’ll and unconscious during the early hours of a Sunday morning. We took her up our local vet college but there was nothing the vets could do and she passed away. We were heartbroken - she was such a loved member of our family. We donated Milly’s body to the Vet College for research. Our grandchildren created a beautiful plaque that we placed under a tree on our property in her memory. 🐾💕

Having worked in the funeral industry myself, it will never do another funeral Even for my darling Mouse, who is a Jack Russell but I will certainly not leave her at the vets but ask a friend if we can bury her in their garden to give life to plants. Our last two dogs, one a Great Dane and another Jack Russell were buried in our garden. We live in an apartment now so I don’t think the other residents would be too happy about Mouse being buried here. She is 12. Hopefully we see another four or five. She rescue Ian’s we have enjoyed her since she turned 7 😪

Our beloved Chardee a Jack Russell ,was so intelligent ,she remembered all her toys by name , some forty odd , when we wanted a specific toy from her box we would go WHERES ?she never ever got it wrong. Sadly Chardee was losing her strength in her hind legs and the vet advised us what was best for her .The vet came around home to put her to sleep we said our last goodbyes.She was taken away to be cremated,we have her ashes in a bag in the bedroom,l have tears in my eyes as I write this.Sadly missed.

Thanks for your words and you are not alone in your loss. We had to part with a sixteen year old border Collie in late May. He had put up with arthritis for some years with the help of regular acupuncture. Never seemed to complain. The final act came when he became stuck under is beloved bed and had to be helped out and up. The vet was great and presented our old friend with two treats Ashe lay his head down. He is at rest in a garden he loved under a large stone for us to remember.

Thanks for this wonderful account. I too am in the funeral industry as a funeral celebrant. Animals deserve meaningful farewells too. I was present to a very intimate farewell with one person recently at the loss of her furry pet. I prepared some words and we shared sweet moments together. She was so grateful even weeks after with the box of ashes, just with me, one person. Some comfort in this grieving time.