NewsDo you suffer from F.O.G.O.? 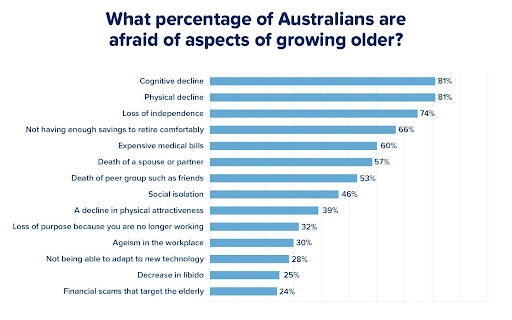 Here’s another dreaded acronym to add to the alphabet soup of trends, and what’s worse, you may suffer from the condition.

It’s called ‘FOGO’, or Fear Of Growing Old. According to a national survey by CareSide, a home care provider, we are in the grips of anxiety and worse when asked to rate the various impacts of ageing.

The leading frights are cognitive and physical decline, a loss of independence and insufficient funds to retire comfortably.

Funnily enough, the lowest ranked dreads include a decrease in libido, scamsters targeting the aged, and loss of work through difficulty adapting to new technologies.

Death, which some might feel would be the greatest fear of growing old, is roughly in the middle.

I’d shift a few of the findings around, but the top three of decline and loss of independence are pretty hard to beat. What keeps you awake at night about ageing, and is it comparable to the list above?

Thank goodness there are some aspects of getting on in life that those surveyed do look forward to, and they mainly have to do with having more time.

When the same survey asked what people were most excited about as they grew older, the results were naturally cheery. Having more time featured predominantly.

More time for family, friends and travel, perhaps essentially though not having to work.

The survey authors highlight one of the paradoxes affecting many of us, which they call the inverse relationship between health and time as we age.

“In general, people have better health when they are younger but less free time. When they’re elderly, they typically have more free time for leisure but declining health and energy.”

It’s just one reason it’s a good idea to invest in your health all through life, especially as you are getting on in years.

What are you most excited about as you grow older? I’d say it’s to stay enthusiastic and open to life and ensure the body, mind, and spirit stay up to the job for as long as possible.

I'm in the process of growing old gracefully, and am only concerned about the things I have no control over. At 75, two good things happen every morning, I wake up, and can then get vertical. I still have all my marbles, am healthy and reasonably fit,( go for a walk most mornings ) although a few creaks and groans are starting to appear. If I've budgeted, planned and done my sums right, the money will run out on my 100th birthday. What concerns me most is the loss of independence if I lose my driving license, any future obscene medical bills from rapacious medicos, and anything happening to my wife of 47 years. I am able to spend more time with our daughter and two grandsons. We recently moved to the NSW south coast, and have joined some local groups and made new friends. Life is pretty good sitting in the sun and watching the waves roll in.

I have suffered from FOGO since I was 4 years old when my great aunt died. I’m fearful of death, but I am so afraid of living a long life without work, income, purpose, & family who bo longer need me, all combined with declining health, cancer fears, dementia, loss of mobility & independence, and on and on the fears build. I’m 54 & I dread the future and I dread death. I try to avoid thinking about it.