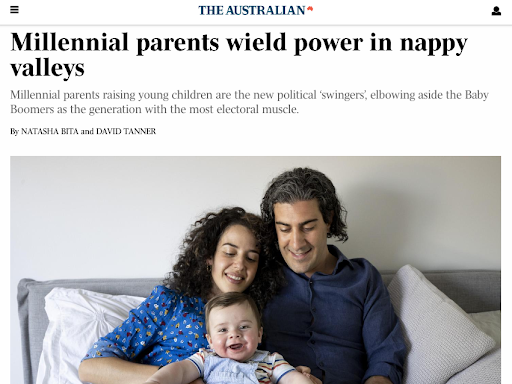 Do kids make you more conservative?

After last week’s budget and this year’s federal election, there’s been some talk of the political mantle passing from the Baby Boomers to the Millennials.

For some years, we Boomers stood accused of dominating the national agenda by pushing back on policy measures such as negative gearing and super reform.

Due to sheer numbers, the worm may have turned as Boomers begin to fade away and Millennials have kids and settle down with more money.

The political analysis is that Labor is focused on issues the Millennials, also known as Generation Y, tend to care more about, such as childcare and gender equality.

The demographic reasoning comes through census figures which show Boomers, aged 55-74, are being eclipsed in raw numbers by the Millennials, aged 25-39.

But are generalisations about generations enough to flip election outcomes at the state or federal level?

A recent story in The Australian, linked here but beware of pay wall, says millennials with children are the new political swingers with the electoral might to swing public policy.

Demographer Mark McCrindle was quoted as saying idealistic younger Australians tended to become more conservative once they had kids.

“They’re moving from the single-life stage when they’re more progressive to the family stage, where they value financial conservatism, sensible budgets and government support,” he said.

The Australian Bureau of Statistics figures say both cohorts currently clock in at about 5.4 million heads or a neck-and-neck 21.5 per cent of the population.

The irony is that the once much-vaunted Generation X, those aged between 40-54, have actually fallen to a slice of less than 20 per cent.

If you are a sandwiched Generation X, are you smarting at being left out?

Isn’t there enough variety within those called, like it or not, Boomers to make any political generalisations useless?

The answer may lie elsewhere with the fascinating question: does having children make you more conservative?

A recent piece in the left-leaning Guardian no less argued it does. The American research suggested while social conservatism increases with age, the relationship disappeared once parenthood was taken into account.

“Researchers have found that people who do not have children tend to be more socially liberal than parents and that having children helps explain why people tend to become more right-wing with age.”

What is your experience? Kids can drive you crazy, but do they provoke a shift to the right? We always thought that was just getting older.

Can raising nippers really drag a lifelong leftie across to the Liberals?

Do kids make you more conservative?

I am not hoing to argue with you on this we are too far apart on our beliefs on politics. Voting for the Liberals would be like cutting off my leg. As a disabled woman it is against my own interests to vote conservative. So this is my last post

The Boomers have had a hedonistic conservative approach and look how that is serving their children. With the middle classes slowly turning into the working poor. I have gone even more left for my grandchildren. It is the only way forward for a better future for them. Conservatives are destroying everything for profit without thought for the future.

Someone from QLD replied to Robert:

Because the conservative government had done so well in 9 years that inflation is rising and wages stagnated. Only rich people can afford to be conservative and only an idiot in the working class would vote liberal and against there best interests

I'm a fence sitter, and an admirer of Churchillian wisdom.. Consider the following................ Fraser inherited and had to contend with the Whitlam mess ( if you're old enough, remember Cairns, Connor, Willessee, Melosi, Khemlani etc etc ) It took Howard and Costello 10 years to pay off the Hawke/Keating mess Turnbull/Bishop/Morrison were within a billion or so of paying off the Rudd/Gillard/Rudd mess ( and yes they did cop the GFC ) prior to the arrival of Covid. I have great hopes for Albo and his team. but the cracks are beginning to show already. Also consider....... Medicare was never funded properly from Day 1 ( and never included dental ) The DSP was never funded properly from Day 1 And both are in deep trouble and in dire need of massive federal government funds injection. Stay tuned and watch this space. Time will tell. .

Robert from NSW replied to Robert:

For the uninitiated......... Conservative - a political philosophy based on tradition and social stability, stressing established institutions, and preferring gradual development to abrupt change. Large differences between Conservative, Liberal and Labour. Evolution not Revolution. Get it ???